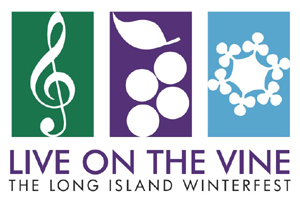 (RIVERHEAD, NY, January 27, 2016) – Winterfest Live on the Vine returns for its ninth and most eclectic year ever! This award-winning festival is a five-week, mid-winter music and wine festival, running each weekend from February 19 through March 20, 2016. Winterfest is a project of East End Arts with support from the Long Island Convention and Visitors Bureau, The Long Island Wine Council, and presenting sponsor, Suffolk County National Bank.

Winterfest Live on the Vine will feature more than 70 concerts and wine events in over 40 unique venues throughout Long Island’s scenic East End. Vineyard tasting rooms, boutique hotels, and historic theaters provide the stages for more than 30 emerging artists and legendary Grammy-winning headliners in a diverse menu of musical styles: jazz, rock, country, world, singer-songwriter and more, amidst the backdrop of one of the most charming regions in New York.

Winterfest is also very excited to announce the addition of the Long Island Wine Council’s “Art of Wine” events. This exciting and hands-on series of over 23 wine-focused events gives visitors exclusive access to rare wines, Long Island’s incredible winemakers and progressive winemaking techniques. Guests can spend a day or a weekend at Winterfest; special all-inclusive weekend or one day packages are available.

Additional Information
Conceived in 2006 by East End Arts, the Long Island Wine Council and the Long Island Convention and Visitors Bureau (LICVB), Winterfest Live on the Vine was created to encourage employment to musicians, and to bring tourists to the region during slower, winter months. In 2012, the festival was awarded the “National Destination Marketing Award” by Americans for The Arts and Destination Marketing International.
Winterfest Live on the Vine would not be possible without Presenting Sponsor, Suffolk County National Bank. The festival is a project of East End Arts, with support from the Long Island Convention and Visitors Bureau, the Long Island Wine Council, with additional support from NYSCA, Suffolk County, AARP, Certilman Balin Attorneys, Hamptons Art Hub, and produced by veteran festival promoter J Faith Presents (Great South Bay Music Festival).
For 2016, Winterfest has again added headliners to the schedule, and widened the scope and theme of the festival. With the addition of the “Art of Wine” series, and non-musical events to the schedule, all are ingredients that Faith believes will help enhance the Winterfest Live on the Vine experience; the experience of this Winterfest is like no other. The combination of world-class music, in an architecturally stunning environment, amid the backdrop of the magnificent East End of Long Island, is what makes this festival the unique experience that it is!

For more information about Winterfest Live on the Vine, please visit: www.liwinterfest.com.