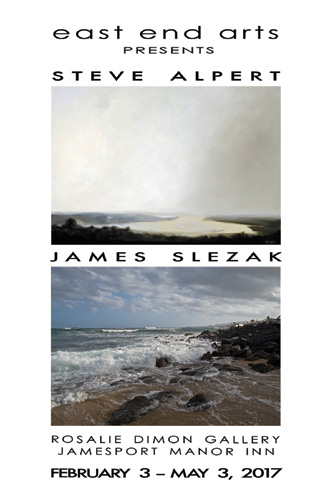 (RIVERHEAD, NY, February 1, 2017) –– East End Arts is pleased to announce the new art show at the Rosalie Dimon Gallery, at the Jamesport Manor Inn (located at 370 Manor Lane in Jamesport, NY) featuring East End Arts members: landscape paintings by Steve Alpert and photographs by James Slezak. The show opens on Friday, February 3 and will be up for viewing until May 3, 2017. An Artists Reception will be held on Sunday, February 26, from 3:00 PM to 5:00 PM at the Rosalie Dimon Gallery, where the public will have the opportunity to meet the artists. Local wines and artisanal cheeses will be served. The public is invited to this free event. The exhibition is open for viewing during the Jamesport Manor Inn’s open hours: Wednesdays through Sundays, 11:30 AM to 9:30 PM during lunch and dinner service. For more information, visit https://eastendartsorg.presencehost.net/calendar/event/2017/02/03/1486098000/rosalie-dimon-gallery-show-steve-alpert-james-slezak/150021.

A native New Yorker, Steve Alpert has been painting for more than forty years. Fine art galleries all over the U.S. represent Mr. Alpert’s work. Alpert also makes American Military Contemporary paintings that honor the men and women who serve and have served in the U.S. Armed Services. His triptych, “Portrait of a Woman” was on exhibition at the home of the Vice-President during the 2015 holiday season before being unveiled at the Women in Military Service for America Museum at Arlington National Cemetery. Mr. Alpert’s military paintings are part of the permanent collections of The United States Museum of the Marine Corps, Quantico VA, The Pentagon, and the Air Mobility Command Museum, Dover AFB, Dover, DE. In addition to his work as a painter, Alpert is also an author, theatrical producer, and teacher. A partial list of galleries includes: George Billis’s Art Essex of Essex, CT; DFS of Manhattan, NY; Beacon Fine Art of Red Bank, NJ; Chandler Gallery of Jupiter, FL; Dean Day Gallery of Houston, TX; Kirchmann Gallery of Johnson City, TX; Ocean Reef Gallery of North Key Largo, FL; Sottil Studios Key West, FL; Petris Fine Art of Sausalito, CA; Rich Timmons Gallery of Doylestown, PA; Royal Street Gallery, Aspen, CO. Steve Alpert is married to Dorothy Devlin, CEO of Devlinhair Productions in New York City. Steve Alpert maintains working studios in Manhattan, NY, and in Quogue, NY.

Photographer James Slezak's images in the Rosalie Dimon Gallery exhibit show some of the range of what interests this award-winning photographic artist. Some of these photos show the power and beauty of wind, ocean and light. Other images have been more extensively post-capture processed such as a sailboat silhouette against a warm hint of sunshine, a haunting multi-layered image of trees, dark waters and an over-sized moon and a selection of ghost-like, semi-transparent trees. The images were shot in Hawaii, Arizona and home territory, Hampton Bays. Slezak's images have been in shows at the East End Arts Gallery, Art League of Long Island, Suffolk County Historical Museum, Remsenburg Academy, Guild Hall, Southampton Cultural Center, Gallery North, Maryland Art Federation and Heckscher Art Museum; and have been published in the Riverhead News-Review, Attencion (a newspaper in San Miguel de Allende, Mexico), The Wine Press, The New York Times, The Sag Harbor Express, The Southampton Review, and The Sun magazine. "I have never thought of myself as an artist," comments Slezak. "I was trained as a scientist in a PhD program in experimental psychology many years ago. I left the program but do think of myself as having a scientific approach to most matters. I am comfortable with most things that are technical and worked in information technology for two decades. For me the practice of photography is frequently a flow experience and I am very tuned in to my visual surroundings. Images that have a meditative quality are often the outcome. Some of my images freeze fleeting movements and shadows while other photos find the beauty in ordinary objects. Sometimes the final version of an image is quite a departure from what was caught originally on the camera sensor."

For more information about viewing the exhibition, call 631-722-0500 or visit JamesportManorInn.com.
# # #
East End Arts, established in 1972, is an award-winning 501(c)3 not-for-profit arts organization, and operates a School of the Arts, an Art Gallery, and presents a variety of events and programs to promote the arts year-round. Proceeds from all events, sales, classes, donations, and memberships benefit the mission and commitment to building and enriching our community through the arts by way of education, support, advocacy, and inspiration.