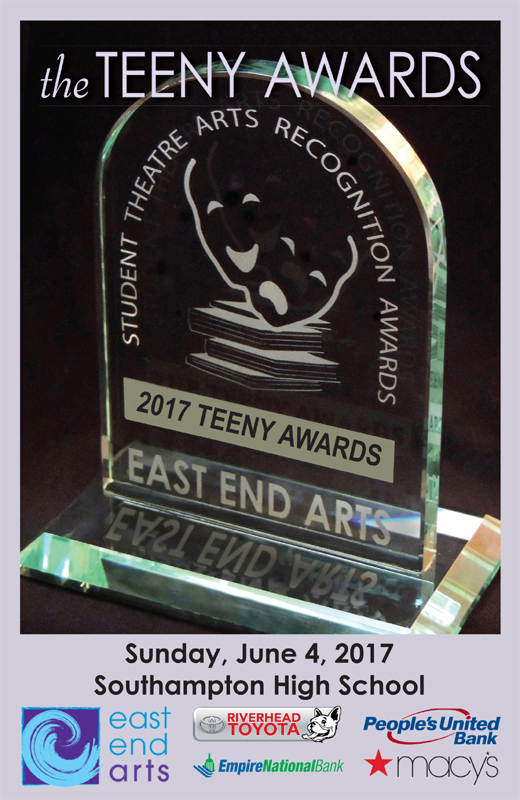 (RIVERHEAD, NY, June 4, 2017) – East End Arts is thrilled to announce the 2016-17 Teeny Awards winners, presented during the formal awards ceremony held at Southampton High School on Sunday, June 4, 2017. Nominees, dressed to the nines in their formal attire, decorated the pre-show red carpet, and at the commencement of the awards ceremony, were presented individually to the audience as they filed into the spotlight onstage one at a time to thunderous applause. Arts supporters, theatre professionals, and prominent community members presented the winning awards, and each winner received a glass trophy. The Teeny Awards, conceived from the idea of the Antoinette Perry Awards – The Tony Awards – for Broadway shows, has been celebrating excellence in high school theatre across the East End of Long Island since 2002, and is presented and coordinated by East End Arts.

The audience was treated to scenes from some outstanding performances from this year’s productions from the 16 participating high schools in the region, and celebrated the best of the best in East End high school theatre. Performances included:
• “Carnival” from In The Heights at East Hampton
• “Do-Re-Mi” from The Sound Of Music at Westhampton Beach
• “Mama I’m a Big Girl Now” from Hairspray at Riverhead
• “Stumble Along” from The Drowsy Chaperone at Mattituck
• “Show People” from Curtains at Shelter Island
• “I Have A Love/A Boy Like That” from West Side Story at Shoreham-Wading River
• “The More We Dance” from Dirty Rotten Scoundrels at Longwood
• “L-ve While You Can” Scene from The Drowsy Chaperone at Pierson
• “Pray” from Once On This Island at Greenport
• “It Takes Two” from Into The Woods at Southampton
• “One Day More” from Les Misérables at Southold

Anita Boyer, East End Arts Teeny Awards Coordinator, comments about this year’s program: "I am so proud of this year’s group of performers and am thrilled at this incredible opportunity to honor them. Being the coordinator for East End Arts Teeny Awards these last four years has been such a great experience and I am so grateful for the opportunity. I hope that the students, directors, and everyone involved in high school theatre programs continue to create and cultivate the arts as they are of integral importance to our communities. Thank you all so much, and a huge thank you and “good luck” to my fabulous successor Kristen Curcie!"

Lead Male in a Play – TIE
Alex Bradley in the role of Merle in “You Can’t Beat the House” at Mattituck
Matthew Schiavoni in the role of Elwood P. Dowd in “Harvey” at Pierson

Supporting Female in a Play
Alexandra Meli in the role of Polly in “Play On!” at Shoreham-Wading River

JUDGES' CHOICE AWARD
This award is chosen by the judges in a vote. It is for a particular scene, musical number, dance
number, ensemble effort, or group that the judges feel stands out enough to warrant the special
recognition.
This year, the recipient is the musical number “Carnival” from “In The Heights” at East Hampton
for their energy and celebration of diversity on stage!

Producer and Publicity
Gaby Gonzalez for “The Drowsy Chaperone” at Mattituck

All nominees and winners are listed at eastendarts.org/programs/teeny-2017-nominees.html.

For more information about the Teeny Awards, contact Anita Boyer at teenyawards@eastendarts.org or 631-507-4603, or visit eastendarts.org/programs/teeny-awards.html.

East End Arts, established in 1972, is an award-winning 501(c)3 not-for-profit arts organization, and operates a School of the Arts, an Art Gallery, and presents a variety of events and programs to promote the arts year-round. Proceeds from all events, sales, classes, donations, and memberships benefit the mission and commitment to building and enriching our community through the arts by way of education, support, advocacy, and inspiration.