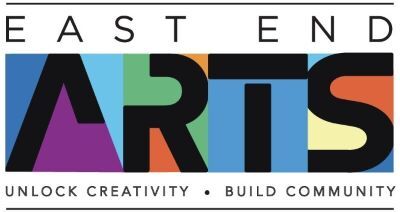 The MLK Portrait Project is a way to honor the impact of civil rights leaders by working together in unity- each creating an individual part, that ultimately becomes a whole. Every panel style is different, yet they all fit together. Each year it engages local High School art students to create large portrait mosaics as creatively as they desire. At the completion of the project, all portraits will hang in their corresponding schools, then displayed in a public gallery, then auctioned off to support EEA's scholarship fund for art and music students in need.

The MLK Portrait Project was inspired by the work of our teacher, Kenneth Jackson. The project was created to engage talented student artists across the East End of Long Island and to honor Martin Luther King Jr. Portraits were created on individual 12 x 12 panels with mostly acrylic as a mosaic of images to construct an ultimate image of Martin Luther King Jr. and eventually other civil rights leaders.

This year's photos for the MLK Portrait Project, in honor of Martin Luther King Jr and the Civil Rights Movement, pay tribute to those individuals who did their part in supporting the Civil Rights Movement by utilizing the powers of Music, Politics, and Protest. We will continue to create the final portrait the same way we have done the MLK’s in the past, see procedure below.

Rosa Parks: In Montgomery, Alabama on December 1 1955 Rosa Park’s single act of defiance – refusing to obey a bus driver’s order that she give up her seat in the colored section of the bus to a white passenger – sparked the first major co-ordinated civil rights protest – the Montgomery Bus Boycott. Although this failed in its immediate aims it precipitated subsequent protests, and Parks became an emblem for peaceful stoicism in the face of white oppression. Her act of civil disobedience set an example for future protests.

Ella Baker: Perhaps the most influential woman in the Civil Rights movement after Rosa Parks, whom Baker mentored in the before her Montgomery stand. She largely worked behind the scenes, but associated closely with the major activists, including Randolph and King.

James Meredith: James Meredith is largely remembered as a pawn at the centre of the 1962 Ole Miss crisis, but Meredith consciously pressured the Kennedy administration, forcing it to confront Southern prejudice directly.

Roy Wilkins: Wilkins was Executive Secretary and later Executive Director of the National Association for the Advancement of Colored People. He was an articulate and well-respected activist who helped organize the March on Washington and the Selma-to-Montgomery marches of 1965.

John Lewis: The last surviving leading member of the Big Six Civil Rights organizations, Lewis was head of the Student NonViolent Coordination Committee from 1963 to 1966 and helped organize the March on Washington. He was also one of the Freedom Riders.

Mahalia Jackson: Her voice became the soundtrack of the civil rights movement. Jesse Jackson says that, when a young Martin Luther King Jr. called on her, she never refused, traveling with him to the deepest parts of the segregated south. Mahalia Jackson sang at Selma, the March on Washington and King's funeral.

Sam Cooke: Sam Cooke's "A Change Is Gonna Come" became an anthem of the 1960s civil rights movement, his refusal to sing at a segregated concert led to what many have described as one of the first real efforts in civil disobedience.

Nina Simone: By the early 1960s, Simone became active in the Civil Rights Movement, taking part in the Selma to Montgomery marches and recording several songs that soon became civil rights anthems. Her original song, “Mississippi Goddam,” was banned from radio play throughout the South for its frank discussion of racism.

Aretha Franklin: [Article by David A. Love] She was also an artist whose life and music was intertwined with civil rights and the struggle for black equality. A gospel singer who was raised in the church, she was the daughter of C.L. Franklin, pastor of the New Bethel Baptist Church in Detroit and a minister who marched with Martin Luther King Jr.. C.L. Franklin had organized the June 1963 Walk To Freedom, which was the largest civil rights demonstration in the nation’s history until the March on Washington a few months later. Aretha's mentor was Mahalia Jackson, the gospel singer whose voice was known as “the soundtrack of the Civil Rights Movement” and who was a good friend of King's and inspired his “I Have A Dream” speech. Franklin sang “Take My Hand, Precious Lord” at King’s funeral in 1968, a song which Jackson had popularized. That same year, Franklin also sang the national anthem at the Democratic National Convention in Chicago, during a tumultuous political campaign and a year marked by civil unrest, protests, police violence and assassinations. “There's no way to overstate what Aretha meant to the generation that came of age during the Civil Rights Movement,” Craig Werner, professor of Afro-American Studies at the University of WisconsinMadison told NBC News. “She helped us make sense of experiences, insisting with enormous grace and fire that women's voices had to be a part of every conversation. She holds a special place in the hearts of Vietnam veterans who knew she sung ‘I Say a Little Prayer’ to help them survive and heal.